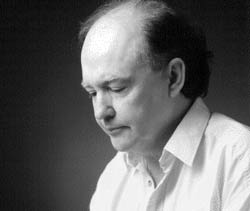 Born Glasgow. Studied composition with James Iliff at the Royal Academy of Music, London (1966-70) and then with the Swedish composer Ingvar Lidholm in Stockholm. His works have been regularly broadcast and commissions have come from the Glasgow University McEwen Bequest, the New Music Group of Scotland, the BBC Scottish Symphony Orchestra, the St Magnus Festival, and the Edinburgh International Festival. In recent years he has produced several large-scale works to critical acclaim: the ballet score Peter Pan, A Glasgow Symphony, a chamber opera The Loving of Etain, and concerti for guitar, trombone, viola, violin and (most recently) double bass. McGuire also plays flute with, and writes for, the Scottish folk group The Whistlebinkies.

He was the recipient of a British Composers Award in 2003 and a Creative Scotland Award in 2004. He was commissioned to compose the finale for the 2006 St Magnus Festival.

Raretunes features some of his other traditional music-related works:

This short piece was composed by Eddie McGuire and recorded by The Whistlebinkies in the late 1970s to demo a television news programme theme idea.

Composed by Eddie McGuire. Commissioned by Radio Clyde, the recording is of the premiere on December 16, 1979, in the Henry Wood Hall, Glasgow and subsequently broadcast on Radio Clyde on 3 January 1981. The performers were The Whistlebinkies (with Alastair Fraser on fiddle), the Alan Darby Band (including ex members of Cado Belle) and six violas led by James Durrant. The title refers to the flowing together of three musical traditions: Scottish folk, jazz-rock and classical. Near the end Eddie incorporates a reel by the group’s piper, Rab Wallace (Broderick’s Bodhran) – accompanied in the bass by one of Eddie’s themes from ‘Confluence’. The piece is dedicated to Eddie’s cousin Harry, a train driver, who died in a railway accident a few years before.

This work has cultural significance as one of the earliest example of a ‘fusion’ composition in the Scottish folk music revival.

A compilation from the soundtrack for a film on the exploitation of North Sea oil composed by Eddie McGuire with the Whistlebinkies. Recorded CaVa Sound Studios, Glasgow around 1981. Edited by Stuart Eydmann. Other live recordings of Inner Sound can be heard at the Whistlebinkies page.

Based on the film theme music above, this tone poem opens and closes with a musical recreation of the sound of the sea and shore. The themes represent the discovery and extraction of oil and gas from the North Sea. Recorded live at The Gable End Theatre, Hoy, Orkney during the 2006 St Magnus Festival by Stuart Eydmann. A version of this piece is the title track of the Whistlebinkies CD on the KLUB label.