Stuart Eydmann was born in Fife, Scotland and developed his interest in traditional music in earnest when he became a student at the Glasgow School of Art in the early 1970s and came into close contact with the Irish traditional and folk music scenes in the city. Aided by a Glenfiddich Living Scotland Award, he undertook extensive field work in the 1980s collecting the music and testimony of the residual generation of, mainly urban, concertina players in Scotland who had formed part of a lively music culture between the 1920s and the1960s. This led to a Doctorate in ethnomusicology and related academic, research and publishing work including the positions of Postdoctoral Research Fellow and Traditional Artist in Residence at the School of Scottish Studies at the University of Edinburgh.

He was a member of the Scottish Government Culture Minister’s  Working Group on the Traditional Arts, has been a lecturer in music history at The Open University and The Royal Scottish Academy of Music and Drama is currently a Tutor at Edinburgh College of Art at the University of Edinburgh.  His current research interests are concerned with popular and traditional music in the modern era, especially instrumental revivals, and he has written on the fiddle, the clarsach, the free-reed and percussion instruments, on musical connections between Scotland and Ireland and on the collecting and archiving of recorded sound.

Stuart is a long-time member of The Whistlebinkies  He was co-founder and is curator of rareTunes. Photograph (above) of Stuart Eydmann by George Birrell, Edinburgh, 1983.

Stuart writes: ‘This march/jig was composed and recorded in March 2021 for my granddaughter Annabel, who was born during lockdown in 2020. The three repeated G notes in the second strain represent the sounds of her favourite squeaky toy giraffe.’

Played on a gut-strung fiddle of 1775 made by Ruddiman of Aberdeen. Recorded Edinburgh, January 2020.

Stuart: ‘An Irish lament I first heard played in the 1970s played by fiddler Matt Cranitch and by The Boys of the Lough. The online Traditional Tune Archive carries this note without reference to its source:

There is some dispute over who this air is named for. Some argue for Owen Roe O’Neill, nephew of “the Great O’Neill” and commander of the Irish army which drove out the English in the mid-17th century. Others claim the lament is for Owen Roe O’Sullivan (Eoghain of the sweet month) the great 18th century poet from the province of Munster.

I am attracted to the second suggestion as the presumed burial place of Eoghan Rua Ó Súilleabháin is immediately adjacent to that of members of my wife’s family in the beautiful ruins of Muckross Abbey, Co. Kerry.’  Recorded Edinburgh, March 2021. 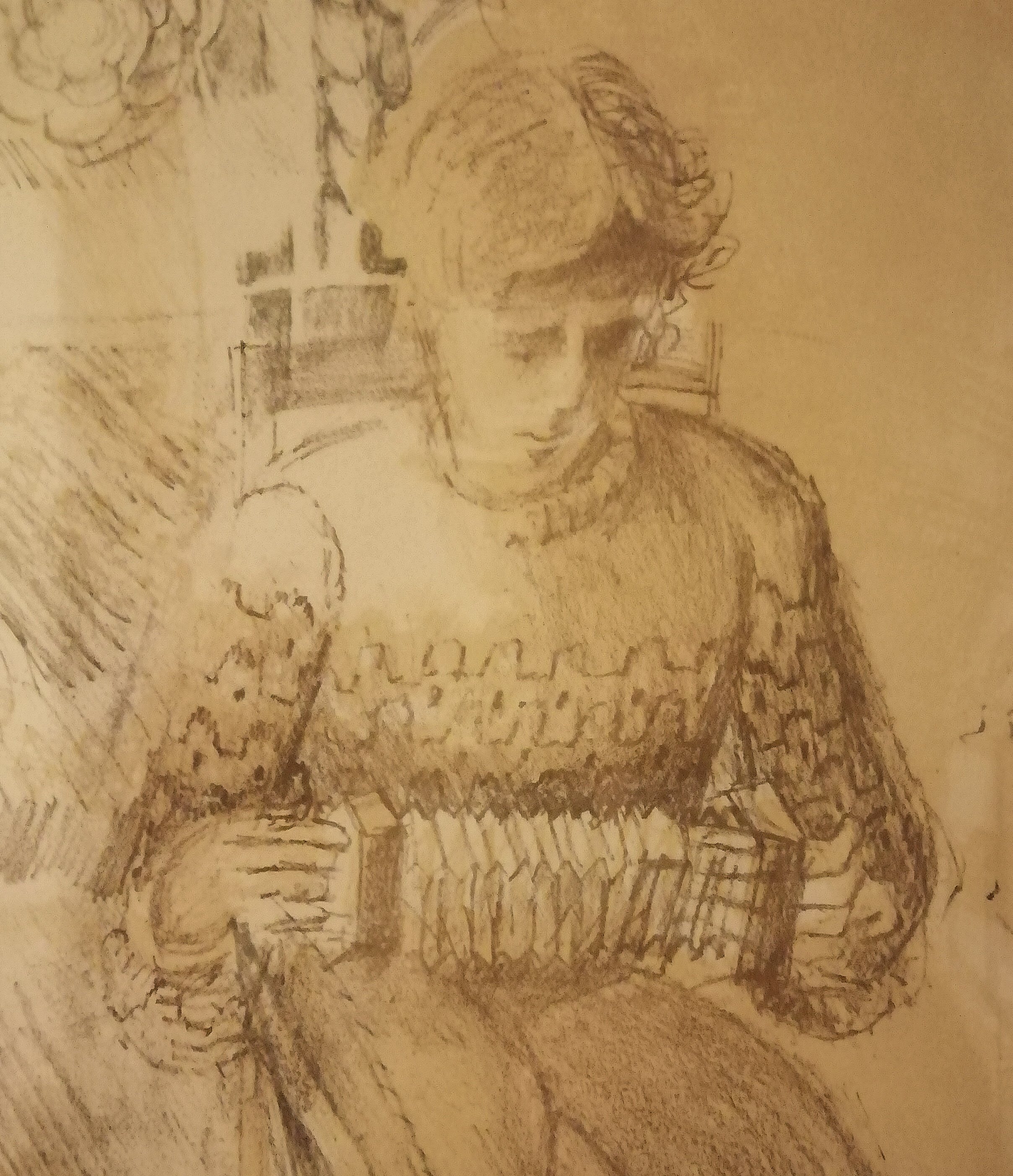 These recordings were made on a wooden-ended 48 button Wheatstone Aeola English concertina made in the mid 1920s. Lithograph of Stuart Eydmann by Mary Louise Colouris, Linlithgow, 1984.

She moved through the fair

Fife and a the lands about it

The piper, the harper, the fiddler

An extract from a live concert recording of a specially commissioned work by composer Eddie McGuire for folk ensemble and organ. The piece features a dialogue between the reed tones of the organ and the concertina. Concertina is played by Stuart Eydmann and organ by Michael Bonnaventure. Recorded Church of St Andrew and St George, Edinburgh.

An air composed by Tony Cuffe. Played on English concertina with other instruments, all by Stuart Eydmann. Recorded Edinburgh, Scotland, 2010.

Such a Parcel Of Rogues in a Nation

These tracks feature a new, bespoke miniature concertina (above left) made in 2018/9 by Andrew Norman. The instrument was commissioned to explore the idea of a modestly priced, lightweight and portable instrument specially designed for the playing of Scottish traditional music.

The keyboard layout is based on the classic English concertina system but with a greatly reduced range. Some of the deleted notes are substituted by duplicates to provide alternative fingerings and to facilitate the performance of bagpipe and fiddle melodies with appropriate ornamentation such as triplets and birls etc. The use of high-quality accordion reeds was intended to produce a brash timbre more suited to the traditional session than the concert hall.

Donald of the Sun

‘I first heard this tune played on pipes in the late 1970s by Pipe Major Iain MacDonald of Neilston who sadly passed away this year [2020]. The setting of the tune, which may have its origins in an Irish jig, is from the influential Glasgow piper Duncan Johnstone.

The Three Peaks of South Uist

Stuart Eydmann writes: ‘Another tune from Duncan via Iain MacDonald. I recorded this on the 48 key concertina back in 1980 with The Whistlebinkies but here I play it on the new Norman instrument to test its opportunities for triplets etc. I still find it a tricky piece for English concertina on account of where the notes lie across the divided keyboard. The tune is by John Scott and is discussed here. I was immediately drawn to the piece as it seemed so evocative of the dance music and song of the southern Outer Hebrides. I wrote the liner note for the Whistlebinkies 3 album quoting Sorley Maclean’s lament for his brother Calum in which the poet visualises three prominent mountains of the island, which may, or may not have been in the tune composer’s mind. More recently, Professor Dan MacInnes of St Francis Xavier University, Antigonish, Nova Scotia, has speculated on alternative mountain combinations as can be read here.’

‘A favourite traditional Gaelic song air that I learned from the singing of Judith Peacock in the early 1980s. Recorded Edinburgh, 30 October 2020.

A traditional Scottish jig that may have other names. Not to be confused with the slow air above or the Irish jig associated with fiddler Junior Crehan that clearly derives from the Scottish song air. Recorded Edinburgh, 30 October 2020.

A Swedish schottische that was popular with young Scottish folk musicians in the late 1970s. This was learned back then from Wilma Young of Shetland.

Based on the the Highland setting published for piano in the Logan Collection.

A strathspey popular in Scotland, Nova Scotia and in Donegal.

‘I first heard heard this tune in the 1970s played on fiddle, concertina and Scottish small pipes by Glasgow band The Clutha.’

A strathspey earned from a stray photocopy from a music collection believed to be from Nova Scotia and the composition of Allan J. MacKenzie.

The waukin o the fauld

A song air and slow strathspey from Lowland Scotland popular in the eighteenth century. The title refers to the communal activity of staying awake to watch over the sheep fold.

My first encounter with binaural recording was in 1979 when, as a performer, I took to the stage in a Berlin studio theatre and came face to face with a strange dummy head staring straight at me.

Shortly afterwards, members of the Whistlebinkies, the Scottish folk band I had just joined, supplied the incidental music for BBC Scotland’s pioneering performance of Shakespeare’s MacBeth that was recorded and broadcast binaurally. I remember listening to the programme at home on headphones and still have an off-air cassette recording I made of it at the time.

Directed in Edinburgh and on location by Tom Kinninmont

Later still, my rareTunes colleague, the late Derek Hoy, acquired a pair of binaural microphones and made a number of excellent live recordings of fiddlers which have still to be edited, archived and shared.

For a brief introduction to binaural recording visit this website: https://thirdcirclerecordings.co.uk/blog/binaural-recording

As both a recordings artist and an ethnomusicologist, I am always trying to find the best ways of faithfully capturing the authentic sound of traditional instrumental music.

I have always found the English concertina, one of the instruments I play, something of a challenge in this regard. With this instrument the sound is produced through two separate manuals and, unlike the accordion with its separate bass and melody manuals, scales and melodies are constructed from notes on both sides. You might say the music of the English concertina is a shared occurrence produced by two separate instruments being played several inches apart.

The outputs of the two manuals blend together between the instrument and the ears and for many musicians and sound engineers this is the desired result. However, I am very interested in the degree of aural separation – to me this is an attractive and essential part of the timbre and character of the instrument but something that can be easily lost in standard stereo recording and mixing. Also, any ethnomusicologist or organologist seeking to understand or transcribe the recording of the concertina scientifically needs to know precisely where the sound is coming from at any time if they are to achieve and communicate a full understanding of what is going on, just as they would be expected to when studying the kora, mbira/kalimba thumb-piano, khaen or sheng.

My performance of Scottish music involves the constant execution of very short grace notes derived from the fiddle and bagpipe traditions and these are typically produced by rapidly sounding a note or notes, on the opposite manual from that sounding the melody note being ornamented. The duplicate notes on my little “Caledonian Concertina” custom-built by Andrew Norman were introduced to facilitate this and to also offer opportunities for the playing of triplets, rapid figures of three repeated notes typical of Scottish music, played across both manuals.

Listening back to the above home-made and studio recordings of myself playing I felt that such subtleties, as I heard them, were missing despite how carefully the microphones were positioned or panned at editing.

Then I remembered binaural. I was investigating the purchase a pair of ear-mounted binaural microphones when I located and obtained a 1970s JVC dummy head with detachable and wearable binaural headphone/microphones in an online auction.

The electrics were pretty shot and the connectors obsolete so I replaced the microphone capsules and cables with new ones from micbooster.com. XLR connectors were added to allow direct input into my phantom-powered Focusrite Sapphire Pro-24 audio interface or portable Tascam DR-40 digital recorder and from these I can monitor directly using separate plug-in phones.

The initial results posted below, using the artificial ears of the headphone sat on the dummy head, have been very promising indeed.

The binaural audio should really be auditioned through headphones, rather than a stereo hifi system, but feel free to listen in what ever way you like. To me it sounds just fine from the stereo output from my laptop where the distance between speakers is similar to that between the two manuals on the instruments while being played or my between my own ears.

I intend to add a series of binaural recordings of traditional music here over time so visit again if interested. All feedback on the foregoing thoughts d the recordings welcomed!

Here electronic sounds are combined with an early morning field recording made in Stromness, Orkney.