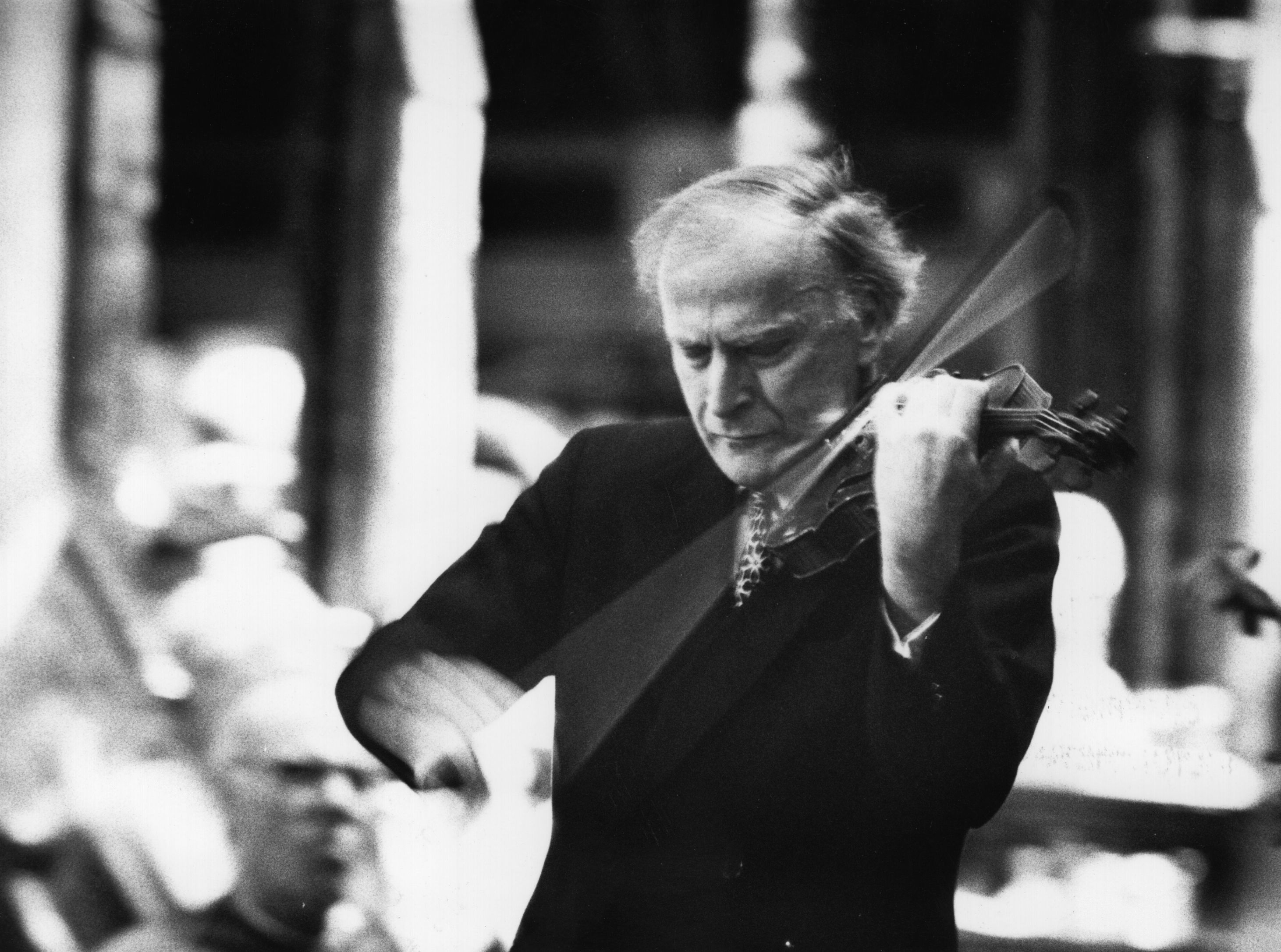 The famous violinist’s interest in and endorsement of the musical and cultural value of the Scottish fiddle tradition were important public factors in its recognition and revival in the second half of the twentieth century.

He was a judge at the final of the influential fiddle competition ”to encourage and perpetuate the art’ held in Perth in 1969 with sponsorship from the National Broadcasting Council for Scotland in association with the City and Royal Burgh of Perth. [Scottish Fiddlers to the Fore BBC Records REB84M 1970]

Then there was the highly popular television programme Mr Menuhin’s Welcome to Blair Castle (BBC One Scotland 2 January 1974 and BBC One London 30 November 1974) directed by James Hunter and Produced by David Martin. The broadcast, which was presented by Magnus Magnusson, featured Hector MacAndrew, Sandy Milne, Jean Milligan, The Royal Scottish Country Dance Society and the Strathspey and Reel societies of Angus and Banchory conducted by Angus Cameron and Sandy Milne. [Radio Times Volume 205, Issue 266428 28 November 1974 and BBC Genome]

As a foreword to James Hunter’s The Fiddle Music of Scotland (Edinburgh, 1979) he wrote:

I salute in my Scottish fiddler friends that innate urge to be audible, visible and recognisable to our clan for what we are and what we feel. Their music knows no detour – it goes straight to our feet if dance we must, to our eyes if cry we must and always directly to our hearts evoking every shade of joy, sorrow or contentment.

This music is living proof that the origins of all music are in our pulse and in our voice and that the true and colorful folk heritage and tradition must always remain at the very source of a culture and of an organised, literate musical life, however erudite and complex the structures may become.

The genuine Scottish fiddler has an infallible sense of rhythm, never plays out of tune and is a master of its distinctive and inimitable style, which is more than can be said of most ‘schooled’ musicians. We classical violinists have too obviously paid a heavy price for being able to play with orchestras and follow a conductor.

May this thorough and well-documented collection of a people’s music serve to keep it alive in the song and dance and, above all, in the hearts of those who will give our civilisation voice, spirit and shape.

Menuhin’s commitment to the Scottish fiddle was ultimately celebrated in the special event Mr Menuhin’s Delight hosted by the the Edinburgh International Festival on 14 August 1985 at the Queen’s Hall. This was to be ‘an exploration of Scottish fiddle playing’ with the great man sharing the platform in turn with a range of fiddlers representing different styles and regions. The featured fiddlers were Edna Arthur, Aly Bain, Ron Gonnella, Alastair Hardie, Bob Hobkirk and Douglas Lawrence. The artistic advisers were Mary Anne Alburger and David Johnson. The show was opened by The Whistlebinkies and, after featuring the celebrated fiddlers in turn, ended with all present playing two tunes, a slow air and a reel, composed for the occasion by Eddie McGuire.

The programme notes for the day can be read here:

A recording of of the event has recently come to light and from it we offer the premiere of the McGuire piece, introduced by Yehudi. Warning: Bodhran beater Mick Broderick gets somewhat carried away in the reel!

The event was reviewed by Alastair Clark in the Scotsman the following day:

Scots fiddle music, for so long fettered to the Fringe of the country’s biggest cultural celebration, finally reached the official Festival stage at the Queen’s Hall yesterday.

It was appropriate that Sir Yehudi Menuhin should preside over what turned out to be a showcase for Scotland’s fiddling talent, for he is an incurable dabbler in indigenous pools.

Some in the audience clearly expected Sir Yehudi to dabble rather more than he did. He was content to listen to the Scots contingent and to pass the occasional comment on the music. Not until the finale, featuring a smooth, gliding air written for him by the Whistlebinkies’ Eddie Maguire (sic) did the maestro pick up his violin and lead the ensemble in spirited style.

Listening to this stirring last performance, fired by the Whistlebinkies’ pipes and drums, one wished there had been more of it. At the same time, there was much to enjoy on the solo side as half-a–dozen top fiddlers took it in turn to demonstrate some facet of the fiddlers’ art, from Bob Hobkirk’s skirling pipe marches (“outdoor music,” Sir Yehudi called it) to the drawing-room complexity of William Marshall’s compositions elegantly arranged for Alastair Hardie’s fiddle and David Johnston’s (sic) cello.

Ron Gonella opened with some particularly fine airs. Aly Bain, accompanied for the first time by his wife, Lucy – well, why not start at the top? – played some robustly ringing Shetland music. Edna Arthur contributed a superb reading of an ancient pibroch, Mackintosh’s Lament, which combined feathery lightness with rugged ferocity, and Douglas Lawrence played a nice Scott Skinner set.

As presenter, Mary Anne Alburger did well to draw the historical strands together. Next time – and I hope there is one – maybe the fiddlers will get together, too.

Reviewing the concert in the New Statesman on 25 August 1985, Angus Calder wrote:

MacDairmid wished Scottish culture to live in a modern and international ambiance. One afternoon at Queen’s Hall, Yehudi Menuhin met the Whistlebinkies, a folk band, and six fiddlers expert in different styles. Mr Menuhin’s Delight triumphed because it was so nearly a cock-up. Audience and performers were delighted by a common fear of disaster. The Beeb, recording the event, had failed to provide technology to ensure that Menuhin’s conversations about technique with other artists could be heard in all sections. The compere kept fluffing and some of the fiddlers looked frightened by the occasion. But they played gloriously. Ron Gonella’s suavely beautiful tone contrasted with Bob Hopkirk’s bagpipe-influenced style and the great Aly Bain’s fierce Norse-Shetland virtuosity. The occasion became historic when Edna Arthur played with supreme skill and intensity a magnificent pibroch dating back to 1526, transcribed for the fiddle in the late 18th century.

Whistlebinkies’ flautist Eddie McGuire, is also Scotland’s leading avant-garde composer (and left-wing with it). The final item was a new slow air and reel written by him for Sir Yehudi. All the performers assembled to participate. the great man, due to lead off, fluffed on the first note, said sorry, and lunged on at once like a small child performing at its first school concert. The piece was fine, the applause was tumultuous; Menuhin played much better in the encore. I felt I was hearing the feudal past being ferried across to the socialist future. Elated, I went out into another torrential downpour. God really doesn’t like to see Scotland getting too big for its boots – or, rather, growing into bigger ones.

After being asked in 1985 by Sheila Colvin at the Edinburgh International Festival to compose a piece for Yehudi Menuhin to play with six Scottish fiddlers of contrasting styles – with The Whistlebinkies as backing group – I evolved a chord sequence and out of that the strathspey-like slow air (The Fiddler’s Farewell) grew. Because The Whistlebinkies were going to play I immediately envisaged the chord sequence as being played by harp or clarsach. The notes of the melody are the most poignant ones that belong to, or resolve into, each chord. That’s why, if I give the music to anyone or have it printed, I always give the melody and the exact accompaniment. I think of them as being inseparable. In both halves of the melody I tried to create a seamless phrase which rises and falls, the first part opening in the minor and the second part opening in the related major key. The reel (Mr Menuhin’s Delight) is a related companion piece that I think possesses a Hebraic flavour. Its key, Eb major, allows the fiddler the full use of the two lowest open strings – as does the slow air’s key of G minor. I subsequently retained all these features when arranging the music for groups and orchestras such as The Whistlebinkies, RSNO, BBCSSO, National Youth Orchestra of Scotland and National Children’s Orchestra of Scotland. It became the finale of my piece Scottish Dances on Original Themes which I wrote for the Junior Orchestra of the RSAMD in 1990. The recording of the concert from the Queen’s Hall has Yehudi Menuhin’s fascinating way of playing it, with a lot of rubato and many phrases high on the G string. I had met him seven years earlier when, as Chairman of the jury of the 1978 Carl Flesch Violin International Competition, he went over the piece I had composed – Rant for solo violin – which had been chosen as test piece for the competitors. Yfrah Neaman also played it through to me in preparation for the judging. I think I had the sound of their passionate playing in my mind when composing The Fiddler’s Farewell and Mr Menuhin’s Delight.

On a personal level I can recall a few things about the day. Menuhin was keen to talk about my concertina and told me that he had one at home, a gift from his son I think, and as we chatted I got him to sign a copy of a one of the pieces we played in my manuscript tune book.

Today, that would be the moment for a selfie but, not to worry, there was a professional photographer on hand (Antonia Reeve) who supplied the photograph [above].

Waiting in the green room I took a dram with Ron Gonella but had to suffer some stick from a nervy David Johnson who chose that moment (of all moments) to have a go at me over something I said in a published review of his recent book on the fiddle in the eighteenth century. Afterwards we ate a hearty meal in the Festival Club with John Purser.

The Whistlebinkies recorded the slow air on the 1989 vinyl album The Whistlebinkies 5 where the solo was played by Mark Hayward. The track was subsequently included on the group’s CD Anniversary on the Claddagh label.

This version of The Fiddler’s Farewell was recorded at The Whistlebinkies’ annual Edinburgh Festival Fringe concert at St Cecilia’s Hall in August 2019. The soloist here is Alastair Savage.

Here is another, more recent, recording of Alistair:

Recordings of the individual fiddlers playing and conversing with Yehudi Menuhin are also in the rareTunes collection.