This article, published in the Scotsman on 23 January 2009 (page 8), ably captured the RareTunes approach and philosophy: 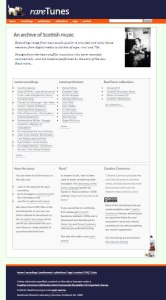 Where might you hear the late Tobermory accordion legend Bobby MacLeod letting rip just a mouse click away from a Polish army choir crooning the Eriskay Love Lilt? Or such other departed luminaries as the great north-east “high-style” fiddle Hector MacAndrew or the peerless traveller singer Jeannie Robertson sharing archive space with the oft-maligned arranger of Hebridean folk songs, Marjory Kennedy-Fraser?

Look no further than a new and characterful online music archive, RareTunes. As Scottish and other folk music at its most cosmopolitan currently crams Glasgow venues at Celtic Connections, RareTunes provides a sometimes wonderfully idiosyncratic treasure trove of traditional and other Scottish music – often of the kind that doesn’t take the stage these days.

With its distinctive Scottie dog and gramophone logo (“His Maister’s Voice”), this free access online music archive has been created by two stalwarts of the traditional music scene, Derek Hoy, fiddler with the renowned Jock Tamson’s Bairns, and Stuart Eydmann, concertina player with another long-standing Scottish folk band, the Whistlebinkies.

The website arouse, explains Eydmann, out of their own “personal ragbag collections of sound recordings”. Over three decades of playing, he’d accumulated boxes and boxes of cassettes, reel-to-reel tapes, and 78s, but, more than anything else, he says, “it was the things I’d recorded myself – of moments and places”. By way of example, he refers to the occasion – preserved now on RareTunes – at Brittany’s mammoth Lorient Celtic festival and he recorded the massed bands tuning up in awesome, free-form waves of bagpipe sound.

Hoy, whose day job – in health information standards development – involves web development, had recorded much material for the teaching he does with the Scots Music Group in Edinburgh. He also had some recordings he’d made of Willie Johnson, of the Edinburgh Zetland fiddlers, who died in 2005. “Stuart and I got talking and we eventually settled down to me doing the web development and Stuart putting most of the content on, because he’s got this huge collection of 78s and has expertise in the musicology and archival side,” Hoy says.

Eydmann, a local authority conservation officer who has also done much research into the history of the concertina, sees the website as an example of how digital technology can be applied to the preservation and dissemination of the kind of “intangible cultural heritage” spotlighted in a recent report from Napier University. “The time is right for such initiatives,” he says, “particularly in education.”

He adds: “But we can’t be unique; there must be dozens of other people with similar collections languishing in their cupboards.” Thus, RareTunes has been designed to be “cloned” by others, with its files stored on the non-profit Internet Archive.

Like many other music archivists at the moment, the pair are keeping a wary eye on the current moves to extend music copyright from 50 to 70 years. “We’re putting these recordings on RareTunes under Creative Commons licences, which allows others to use them freely, although to exploit them commercially you’d need to get permission from the owner.”

As the RareTunes links section shows, there is no shortage these days of folk-music related websites, from the Tobar an Dualchais/Kist o Riches Gaelic and Scots archive being developed by the University of the Highlands and Islands and others (www.tobarandualchais.co.uk), to the Digital Library of Appalachia (www.aca-dla.org/dlamusic/dlamusic.html).

Outside these academically based sites, other resources range from BBC websites to the ever-industrious musician and folk activist Simon Thoumire, whose record label’s extensive website, www.footstompin.com, includes a lively forum, and has recently been placing videos on YouTube.

Hoy and Eydmann christened their archive mindful of the Scots sense of “rare”, as something really enjoyable, but it does indeed contain many rarities, not to mention the unexpected. Rubbing shoulders with the identifiably “folk” artists, you’ll find the reel Forbes’ Farewell rattled out by a US Marine Fife and Drum Corps, originally on a 1902 wax cylinder recording, or the aforementioned Polish army choir, their bass soloist rumbling mellifluously through the scratching of old shellac. And wagt about the ineffable strains of Felix Mendelssohn and His Hawaiian Serenaders, their Scotlandia medley sighing out on massed guitars?

Eydmann reckons he alone has enough recordings “to just about keep me going for the rest of my life.” Other material finding its way on to the site includes traditional music-based projects by the Glasgow composer Eddie McGuire, a colleague of Eydmann’s in the Whistlebinkies, and recordings by guitarist and singer Tony Cuffe, who succumbed to cancer in 2001 and whose unreleased material Eydmann has been editing. And stand by for couthy comedian Will Fyffe and the Dagenham Girl Pipers.

Early recordings, such as those of Patuffa, Marjory Kennedy-Fraser’s daughter, singing her mother’s arrangements (including possibly the earliest known clarsach recording). Kennedy-Frazer’s “drawing room arrangements” of Gaelic folk song have drawn vilification from some quarters of the folk revival, but perhaps today’s greater cultural confidence, along with an archive such as RareTunes, enables us to reassess them more dispassionately. “It’s these things that are slightly on the edge that I find interesting,” says Eydmann. “Things which might never find their way on to a mainstream archive.”

Hoy’s favourites are probably Willie Johnson and old Zetland Hall fiddle sessions. “There’s a great bit on one of them where there’s a pause and you can hear the door squeak open, then Willie’s voice saying, ‘Come in, freen, come in.’ He always had a great welcome for people.”