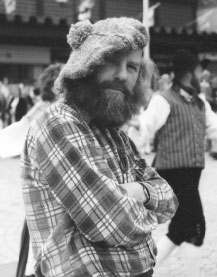 Mick Broderick was born in the Clydebank Blitz and bombarded audiences ever since. His first career in music came to an abrupt end when he was ejected from the local boys choir by a certain Father Bradley after his voice broke suddenly in mid-hymn. However, it was while working as a plater in the shipyards of Clydeside that his true skill as a raconteur and storyteller was honed.

From the jazz scene of the beatnik era he quickly ascended to the heights of Glasgow’s Montrose Street Folk Club and the folk revival began in earnest. Out of this hive of activity, especially around the Scotia Bar and the anti-Polaris movement, came groups like the Jacobites which found Mick lined up with Billy Connolly and Tam Harvey. After they went their separate ways Mick formed the Whistlebinkies with Sean McGhee, Jim Daly and the McGovern brothers. With a change of line up to include Gordon Hotchkiss (concertina) and Eddie McGuire (flute) in the early 1970s their original American sound gave way to more Celtic styles. In 1974 Mick invited Rab Wallace (bagpipes) to join; in 1976 Gordon and Jim left and the group established their commitment to performing Scottish traditional music through a core of harp, fiddle and pipes.

With this “damn band which keeps following me around” Mick banged his bodhran, chanted his songs and told his tales around the world before retiring from the group in the late 1990s.

This was one of Mick’s most well known stories but we were without a recording of it until one was located and passed to us by Kenny Hadden of Aberdeen. Date unknown.

The following set of stories is from a compact cassette tape recorded 15 July 1983 at Balloch Folk Club and 7 May 1983 at Halibees Cafe, Glasgow. The recordings were mixed November/December 1983 at CaVa Sound Workshops, Glasgow by Cy Jack and remastered by Stuart Eydmann, Edinburgh 2006. All music by the Whistlebinkies. All stories by Mick Broderick.

Donald was a Piper

The Prince has landed!

These sea shantys were recorded at a concert on board the tall ship Glenlee at Glasgow, Scotland, c. 2000.

Boney was a warrior

All for me grog

To go to sea once more

This recitation is also from the Glenlee session.