This large band was formed around late 1982 or early 1983 after Terry Small suggested to Christine Martin, formerly of Gizzenbriggs and Fuaran, that he was interested in pursuing a new collaborative idea using Scottish music with Reggae rhythms and voices. It was intended that he would write the lyrics and Christine would choose the tune sets. Terry had set up a recording studio in the St Duthus Hotel in Tain called “The Proles Pleasure Studios” and it was there that these recordings were made.

The line up was: Terry Small, electric guitar and bass guitar; Christine Martin, fiddle and harp and Chippy (Ian MacLennan) on electric guitar. Susan Drever, Jean Arthur and Sara Brass were backing vocalists and the drummers were Ronnie Thomson and Chris Barnet. Sue played double bass and Jean cello on some of the sets. The band often used backing tapes as well as live musicians. 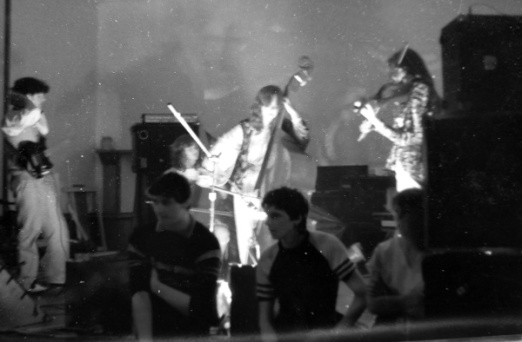 Terry B Small came to Easter Ross from Reading in the 1970s and busked all over the Highlands as a singer/guitarist. Gizzenbriggs met him at the sessions that they ran in Kincraig House Hotel near Invergordon. We would play and sing all kinds of music together. Terry later formed a successful touring rock band The Changelings. We played at various halls and at events in the Highlands including Eden Court (where we did one gig with Andy Thorburn as guest pianist), Portree Gathering Hall, a support gig for Runrig in Moray and various Highland tours. We had a huge PA and a sound man called Stan the Van (Stanley Robertson) who owned the big van that
took us around.

The band name reflected the geological fact that the land north of the river Ness fault line was actually rising but was chosen on account of members’ support for nationalist cause.

The wee man from Skye / Crossing the Minch