Willie Smith (b. 1904) was a professional saxophonist and concertina player originally from Mount Vernon in the East End of Glasgow. He took up concertina around 1924 and was taught by the noted music hall player Walter Dale and by George Simpson of Tollcross, a professional teacher who provided him with his instrument via a shop  [probably Dunlop] in Candleriggs, Glasgow. 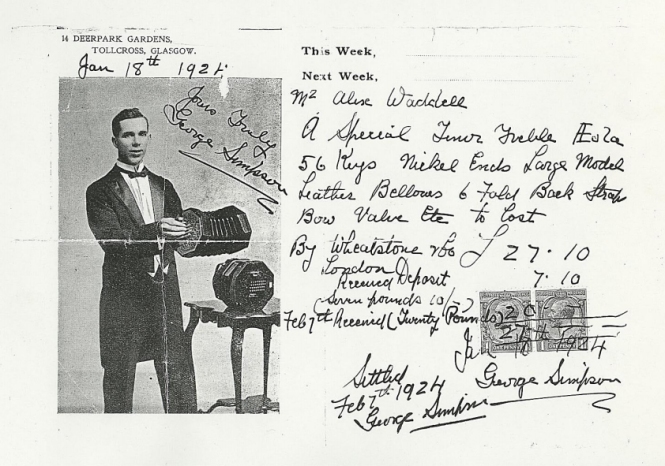 Willie played in dance bands, theatre orchestras, on the variety theatre stage, on ocean going liners and latterly on the Clyde pleasure steamers. His music became well known in Scotland through his playing of the theme tune to the BBC series The Vital Spark and in the orchestral incidental music of the 1954 Ealing Studios comedy film The Maggie.

Composed by Ian Gourlay. Willie would play the theme live along with the audience clapping during each broadcast. Actor Roddy MacMillan played the Jews’s harp.

This recording was made by Jimmy McGregor (who plays guitar) in 1983:

This recording was made by Stuart Eydmann at Willie’s home at Fort Matilda in 1985:

Here are the credits for an episode broadcast on 13 September 1967:

The Vital Spark: The Answer’s a Lemon

The foregoing and collage of sound from the film below give a good idea of the concertina in John Addison’s score performed by the Philharmonia Orchestra. The music is based on the eighteenth century Scottish jig Hamilton House.

At the time of the conversation with Stuart Eydmann, Willie was aged 81 years and in poor health. Nevertheless, he gladly shared some other fragments from his once extensive repertory:

Willie recalled to Stuart Eydmann how he became a “serious” concertina player in the 1920s and gave up his job in mining:

Willie earned his living playing for parties and for dancing:

W.S.: In those days I just played what they called “wee gigs”.
You know, wee dances. I mean everybody danced in
those days.

S.E.: Did you play for the dancing?

S.E.: Was that old time dancing?

W.S.: Old time dancing and new dances. I mean, it wasna the
type of music that they’re using today and the teeny was a great wee instrument [for] smashin’ out a’ the stuff.

As a matter of fact, I got married at that time. I was
earning that [much] money. 12s and 6d for a night in
those days.

S.E.: Did you play Scottish music as well?

He remembered the place of the dulcimer in the dance band before it was abandoned  with the rise of more fashionable instruments:

W.S. The dulcimer? Yes that was right, it was played. That’s what a dance band was you know. There wasna even a drummer in those days. Dulcimer, melodeon, Oh yes, because the dulcimer was the wee hammers, you know, he had the wee hammers in his hands, he made his own hammers. Well you would always get the 8 in a bar if it was the 4 in the bar movement; da-dy da-dy da-dy da-dy. The dulcimer, jumpin’ up and down, Oh aye, it was good stuff. I liked it but it was dyin’ when I went to it. The concertina knocked that out.  Concertina, piano and violin. That put the dulcimer and the melodeon out. People went for the ‘posh band’; violin, concertina, piano and we introduced the drums. Oh well it was marvelous.

“Have ye got drums in yer band?” [They would say.]

With the introduction of popular American dances and the emergence of more formal
bands and arrangements, playing demanded a high degree of literacy, as Willie Smith
noted:

S.E.: What about the music? Did you play from concertina
music?

W.S.: No, anything at all. Anything written in the treble clef, or if it as written in the bass clef you had to play it too. If you went to a job they just gave you a book with maybe 200 tunes in it. You know, different tunes and they’d say play number 66 and 84 and you just got them out the package and you put them up and played them.

It is not surprising to hear a concertina player blaming the rise of the large modern accordion for a decline in the fortunes of his own instrument. Willie:

It seemed to die a death. The big accordion got in… the accordion got in. The people were enamoured. The size of it and the big raucous sounds that could come out of it. You know, pulling it out and pushing it in. But you could never drown this [the concertina] ‘cause it has its own sound. If you had ten accordions one concertina would have been… against the ten of them, ‘cause of the sound that comes out of it, you know.

The concertina was a popular instrument then. If you could play the concertina the whole district was coming to your home, or could hear you play or were going to the concerts, a concert maybe in your own district. The whole place would turn out. “Billy’s playin’ tonight! come an’ we’ll hear Billy playing this, that, you know”.

Willie graduated to playing clarinet in the orchestras of the larger variety theatres in the  city. Opportunities declined as the cinema expanded so he added saxophone to his skills and took work in more fashionable dance bands too. By the early 1930s he had to return to his concertina to make a living:

W.S.: Instead of the variety they went to the talkies, and thatwas the orchestras all  done away with and lo and behold I had to go back to my concertina for a year or  two but I got on the stage just the same.

S.E.: In the variety halls?

W.S.: In variety halls, and just played the teeny [concertina] and all the kiddin’ and swankin’ and blowin’ them round my head and imitating the bells and a’ that kind of thing and I got a living that way…

Willie then took work on the liners, which he saw as one of the highlights of his career:

There is also a photograph of “The Kaye Orchestra” playing on a Clyde steamer c. 1939 that shows piano, cello and saxophone (played by Willie Smith?) published in McCrone, Ian To the Coast: One Hundred Years of the Caledonian Steam Packet Company (Glasgow, n.d) p. 57.