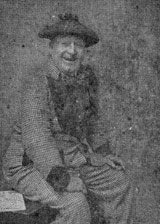 This singer, entertainer and broadcaster was born at Oldmeldum, Aberdeenshire and grew up in the tradition of the bothy ballad and through experience in the informal concerts held in his parent’s hotel became a popular entertainer in church and village halls. He became well known as a broadcaster with the opening of the BBC Aberdeen studio in 1923, and between 1929 and 1939 he recorded for the Beltona label. Popularly known as The King o’ the Cornkisters he continued to make stage appearances almost up to the time of his death. James Kerr of Glasgow published their collection Conkisters “as sung and recorded by Willie Kemp”.