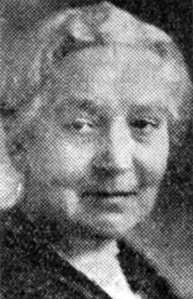 Annie Shand (872 – 1936) was synonymous with Scottish Country Dancing, famous for her dance band, her solo performances, her published arrangements and as an accompanist. Time Magazine on Monday, Oct. 08, 1934 wrote:

At comfortable Balmoral Castle in Scotland King George and Queen Mary had with them their youngest child, Prince-George, and his fiancée, the lovely Princess Marina. There, too, were her father and mother, Prince Nicholas and Princess Helen of Greece, for whom the King-Emporer has developed a great affection. It was all very jolly….. At Balmoral was held the Gillies’ Ball, for the 270 footmen, housemaids, gamekeepers, beaters and guides of the estate. With seven pipers skirling “Hielan’ Ladie,” the royal party entered the great hall. Over her jeweled gown Queen Mary wore a taffeta shoulder sash of Royal Stuart tartan. In the musicians’ gallery was King George’s favorite dance orchestra, Mrs. Annie Shand’s Band from Aberdeen, which has played at every servants’ ball at Balmoral since the War. Mrs. Annie Shand and her band gallantly tackled the Greek national anthem for the royal foreigners. While King George and the Archbishop of Canterbury sat looking on, royalty and servants danced the Paul Jones. There were also the Spanish gavotte and the flirtation polka, but the feature of the evening was a Highland reel by Princess Marina after only two days’ coaching in Queen Mary’s private parlor. 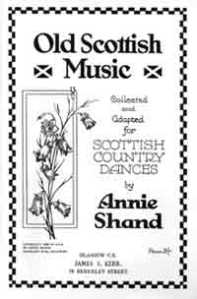 Her Old Scottish Music Collected and Arranged for Scottish Country Dances was published by James S Kerr of Glasgow in 1932 and comprised mainly of tunes from the eighteenth century collections offered as alternatives to those published in the early books of the Scottish Country Dance Society. The introduction noted that “A chord must be played for the bow and curtsey, if these tunes are used at the beginning of the dance.” and “A simple bass part is given to suit the needs of the amateur pianist.”

The following, by Dr Stuart Eydmann is borrowed from the page at University of Edinburgh hosted website The Fiddle in the Scottish Folk Music Revival:

The written history of instrumental Scottish music is predominantly a male affair. However, the wealth of evidence from the early twentieth century on clearly suggests that we need to map a more balanced musical landscape.

The revival of Scottish country dancing as marked by the foundation of the Scottish Country Dance Society in 1923, for example, was steered by a group of prominent women acting as teachers, organisers, promoters, arrangers and providers of music. Within this context, a relatively small number of dance bands achieved poplar success and gained royal and aristocratic endorsement. Several of the key dance music ensembles were led by female pianists, including Annie Shand of Aberdeen.

The Bulletin of the Scottish Country Dance Society (No. 11, March 1937) reflected on her passing away in 1936:

To those of us who attended the General Meeting of the Society in Glasgow in November, it seems almost incredible to think that we shall never again have the delight of dancing to Mrs Shand’s playing. By her death, on November 28th, the Society lost a most ardent supporter, and we of the Aberdeen Branch feel her loss most keenly.

From the founding of the Society until two years ago she worked for its interests with unflagging zeal. No exertion was too hard for her if it was undertaken in the cause of Scottish Country Dancing; nothing delighted her more than to be asked for her help, and she was always willing to turn out in fair weather or foul to come and play in some remote country village or for some struggling Guide Company. Her enthusiasm, indeed, led her to overtax her strength, and in March 1935 she had to give up her work. This period of enforced idleness was a misery to her, but through it all she retained her intense interest in our doings, and after every meeting and every party some of us had always to go “to tell Mrs Shand all about it”. It was a joy to everyone that she recovered sufficiently to be able to attend last year’s Summer and Autumn Schools, and to play for us again in her own inimitable fashion. She was so much more than merely a Scottish Country Dance pianist – she was an artist. Her knowledge of the dances and of their technique was profound, and this knowledge enabled her to give each separate dance its own special lilt and rhythm.

One thing we have to be thankful for – that she was able to make records of so many of our dance tunes. Modern Science has earned our gratitude by making it possible for future generations to hear the finest Scottish pianist of our day, while those who knew and loved her can switch on our gramophones and see, in fancy, her charming smile as we hear the blithe beat of Petronella or the stately measures of Glasgow Highlanders, played by her magic fingers.

Annie Shand was one of the first to broadcast Scottish dance music on the BBC and she made several gramophone records as a solo pianist, as an accompanist to fiddlers and with her own ensemble. For example, the Radio Times previewed a broadcast of Annie Shand’s Dance Band on 24 November 1934 from Aberdeen:

The first broadcast of Annie Shand and her dance band was given in Aberdeen in 1923. Since then she has had many engagements, not only in Aberdeen but in Glasgow and Edinburgh. In the north-east of Scotland her band may be seen at almost every social function of importance and has had the unique distinction of playing at every Ghillies’ Ball at Balmoral during the past fifteen years. (BBC Genome)

Annie also researched, arranged and republished dance music. Her most notable collection was her book Old Scottish Music. This was reviewed in the Aberdeen Journal on 5 November 1932:

A most welcome and useful dance book has been compiled by Mrs Annie Shand, the well-known Aberdeen pianist and accompanist. Her collection, which is printed by Aird and Coghill and costs only 2s. is entitled Old Scottish Music and consists of no fewer than ninety airs, which can be used as alternative tunes for the dances in the first seven books of the Scottish Country Dance Society.

With the advent of the W.R.I. and the realisation after a few years’ experience of negroid corybantism, the old national dances of Scotland have come into favour again. There are scores of these dances and hundreds of airs for them, of which more or less, the Scottish dance Society’s publications, naturally, can only give one for each measure. Mrs Shand’s book, by providing at least one option for eighty-four sets is bound to enhance considerably the pleasure of dancing these old dances.

Her collection is drawn from a great variety of celebrated composers and collections, like Niel Gow and his son Nathaniel Gow; his pupil Donald Dow; and from McGlashan, Marshall, Pringle, Simon Fraser, Lowe and others. There is a good one “Meldrum House,” by Mr Shand and another by A. Walker, Castle Newe, “Birnam Hall”. Some are old Scots song airs, like “Polwart on the Green,” “The Deuks Dang ower my Daddie,” and “The Moudiewart,” which appeared in song books that were published over 200 years ago, and preceded the earliest dance books. There are also some tunes from manuscript belonging to Ian C. B. Jamieson.

All of these tunes Mrs Shand has arranged and adapted, with a simple bass part “to suit the needs of the amateur pianist” by Mrs Shand. They will be found to be admirably done, as indeed we would expect from one with such a long and expert experience of accompaniment work. We hope that Mrs Shand will arrange still another set of alternatives for the Scottish Country Dance Books. There is ample material in the eighteenth century collections alone, and most –though not all –of the measures can be danced to a few tunes.

The introduction to the collection noted that “A chord must be played for the bow and curtsey, if these tunes are used at the beginning of the dance.” and “A simple bass part is given to suit the needs of the amateur pianist.”

On her death, Mrs Shand bequeathed money to the Scottish Country Dance association and her books and gramophone records to the Aberdeen Branch of the SCDS (Aberdeen Journal 16 January 1937).