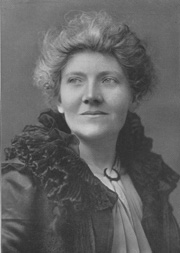 Daughter of Scots singer David Kennedy (1825-1886) and one of several of Kennedy’s children who were professional musicians. James, a baritone, Kate, a contralto, and Lizzie, a soprano, all died in the fire that burnt down the Théâtre Municipal, Nice, in 1881. Margaret, became a ‘sub-professor’ at the RAM, while Marjorie became world famous as collector and arranger of Songs of the Hebrides.

Born in Perth and educated by her father David Kennedy and in Paris she toured widely with her family giving concerts and concert-recitals. In 1882 she began studying Gaelic music and language and to collect folk songs. Inspired by contemporary collection of Breton folk song she gathered a large number of Gaelic songs in the Highlands and published them in several volumes as Songs of the Hebrides which appeared in three volumes between 1909 and 1921 with a fourth volume, From the Hebrides, a few years later as well as many individual song sheets. Her music was generally presented with piano accompaniments and she used her own English words translated into Gaelic by Kenneth MacLeod to make art music arrangements quite different from the original sources. In 1928 Edinburgh University awarded her the honorary degree of Doctor of Music, and in 1930 she presented to the Edinburgh University Library her archive of song, including her original wax cylinders of recordings, which have been re-recorded on tape for the Sound Archives of the School of Scottish Studies. Her papers include a manuscript volume of Gaelic songs, manuscripts and proofs of The songs of the Hebrides , papers relating to her libretto for Granvile Bantock’s opera The Seal Woman , proofs of Life of Song (her autobiography published in London in 1929), newspaper cuttings, correspondence, lecture notes and miscellaneous papers.

Her work is now viewed with criticism and suspicion although she must be recognised for her attempts to combine the traditional with modern harmonic arrangements, early use of gramophone in recording and bring the material to a world stage.

See recordings at the page of Margaret Kennedy

Hebridean song and the laws of interpretation (Glasgow, 1922)