Although his early cylinder recordings, as featured below, have attracted some attention from musicians and historians of the record industry, little is known about the fiddler William Craig who recorded for Edison in the early twentieth century. According to the advance list of releases for August 1908 published in The Edison Phonograph Monthly of June 1908 :

A new Edison artist, William Craig, the violinist, of Glenburnie, Scotland, is presented with this Record. Mr. Craig was especially engaged to give us a series of the celebrated Scotch dances, Strathspey and Reel [Lady Binnie / Shores of Lake Erie]. His first selection offers an opportunity for some dexterous bowing and shows him to be a violinist of very unusual ability. Piano accompaniment. Original and not published.

However, the  August 1911 edition was to report:

William Craig dead. A despatch from Glenburnie, Scotland, announces the death at that place on July 10th of William Craig, the violinist, who made Edison Standard Records 9893, 10120, 10357 and 10440.

As with most other early recording artists, Craig is not mentioned in any of the standard works on Scottish fiddle music and its players and his cylinder recordings are not included in Bill Dean-Myatt’s invaluable Scottish Vernacular Discography of recorded material. Despite this, we can confidently say that Craig was one of the first players of Scottish music featured on commercial records – James Scott Skinner was the first – and it is not surprising that Edison would have seen the potential for such music, especially among those of the diaspora.

Who was Craig? The death records for Scotland have no William Craig passing on 10 July 1911 and it is not clear which Glenburnie was his as there are several places with this name in Scotland, most notably in Lanarkshire and at Newburgh, Fife. Why did a Scottish fiddler record a tune named after one of the Great Lakes of North America?

Intriguingly, the www.findagrave.com website includes details of a William Craig who died on 10 July 1911, aged 73, at Kingston, Frontenac County, Ontario, Canada. This Craig is buried at Cataraqui Cemetery in the city. His wife is recorded as Eleanor Isabelle Waggoner Craig, born 23 March 1845 at Kingston and buried in the same cemetery after her death on 3 May 1925, aged 80. They were married in 1863. The site includes photographic portraits of both:

The www.familysearch.org website also notes a William J Craig who died at Kingston, Frontenac, Ontario Canada on 10 July 1911, noting, presumably from his death certificate, that he was born on 5 September 1836 at Kelso, Roxburghshire, Scotland. His father is given as Andrew Craig and his spouse as Eleanora Waggoner.

Craig’s birth predates statutory birth registration in Scotland but a search of church records shows a William Craig born or baptised (the actual certificate has still to be examined) on 14 September 1836 at Eckford in the Scottish Borders (Parish Number 787/A Ref 20 33 Eckford p. 33). Eckford is a small village located between the towns of Kelso and Jedburgh. The child’s father is given as Andrew Craig, shepherd, and his mother as Janet Weddel:

The Canadian 1901 census record for Frontenac  throws considerable light on William Craig and his family helped by the fact that the entry is conveniently summarised as an instructive example on the www.ancestry.ca website. The household comprised at least six members. William is recorded as the head along with his sister Jessie, who was born 6 April 1830 in Scotland. Both identify as being of ‘Scotch’ heritage and of Canadian nationality and state that they arrived in Canada (with their parents?) in 1851. William’s profession is given as ‘farmer’. Craig’s wife Elenora was born in Ontario in 1845 and claimed German heritage. In 1901 there were four children, Joseph, Jessie, Donald and Gertrude, in the household although there may also be an associated second household comprising an Andrew Craig, farmer, (an older son?) aged 36, and his Irish wife. All members give their religion as Presbyterian and their mother tongue as ‘Scotch English’. William declared that in addition to his principal occupation he had an annual income of 200 (£or$?).

Historical maps of Frontenac are also very helpful. This map, from 1860, shows the home of A & W Craig. This is probably Andrew Craig and his son William. This was nine years after William arrived in Canada and he would have been in his early twenties by that time:

The 1861 census gives the head of the household as Andrew Craig, a farmer born Scotland and aged 70. He was living in a single-storey, log cabin with his wife Genet aged 63, James, a labourer aged 46, Robert a labourer aged 42, Jesse aged 25 and William, labourer aged 23. Their religion is given as United Presbyterian while their neighbours in the township were Wesleyan Methodist, Roman Catholic and Church of England. Most of their neighbours gave their origin as from Scotland, Ireland or Canada.

This map of 1878 also shows the names of the farmers and their lots. The black dots and squares are farmhouses although a substantial building is shown on the 100 acre Craig plot by the road. Presumably W & J Craig refers to William and either Janet (his mother) or Jessie (his older sister): 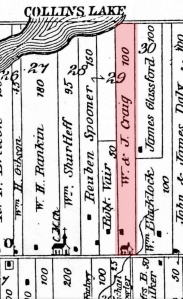 But what of Glenburnie? To this day Glenburnie is a rural community in the city of Kingston, Ontario, located north of the urbanised area of the city. Enlarging the field of the previous map shows that the Craig lot was firmly situated within that community. Any mail, telephone or cable communication with Edison Records would likely have been from the Glenburnie Post Office hence the understandable error that William Craig had died in his home country. 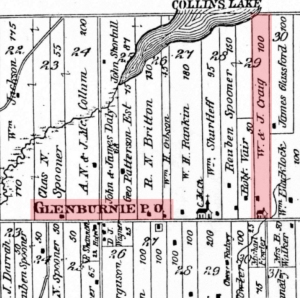 And what of his music? Did he bring his music from Scotland? Who did he learn from? Was his style and repertory typical of the time and locality with its mixture of Scottish and Irish residents? How did he come to the attention of the Edison company? Where did he record? At Edison’s main studio on the top floor of the Knickerbocker Building, at 5th Ave. & 16th St. in Manhattan?

Craig was one of the first to record the ever popular Harvest Home. See: https://tunearch.org/wiki/Annotation:Harvest_Home_(1)

Comments from the www.tinfoil.com web site:

Given that this tune was already an old favourite (see the Edison advertisement, below) when this recording was made over 100 years ago, this qualifies it as doubly old . . .

The faint thunking sound heard through much of this record came from the recording horn (which would have been suspended by cables) lightly swaying due to something nudging or tapping it – perhaps Craig’s busy bow did it!

Welcome to our new followers.

RareTunes was started in 2006 by volunteers Stuart Eydmann and the late Derek Hoy who saw the need for such an archive and wished to demonstrate its potential. It remains an independent, not for profit project undertaken without external funding. This version was launched in Spring 2016.

Our recordings are archived on the Internet Archive. For more information visit the FAQ page.