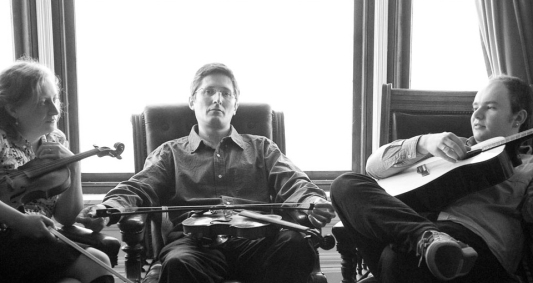 The Simon Bradley Trio were formed to record the collection of Simon’s tunes published in his book From Buncrana to Baleshare. The music charts Simon’s musical journey from his father’s homeland of Buncrana, Donegal, where he spent his childhood summers soaking up the traditional repertoire, through to his current home on the Isle of Baleshare off the West of North Uist in the Outer Hebrides that is home to a population of around fifty. Growing up in the northern town of Rochdale, Simon was immersed in the Comhaltas Irish traditional music community in Manchester. As a student in Edinburgh in the 1980s and 90s, he led many of the lively sessions in Sandy Bells and the Tron Ceilidh House bars. This was a time of instrumental revival and development, emerging bands and an explosion in the amount of festivals and touring opportunities. In 1996, Simon was invited to join the band Llan de Cubel in Asturias in Northern Spain, and this saw him spending significant time touring with the band and absorbing their culture and repertoire. In 2008 he married Edinburgh fiddler and composer Anna-Wendy Stevenson, who was by then living in the Outer Hebrides and leading the development of music courses for the University of the Highlands and Islands. Simon is currently programme leader for the MA course Music and the Environment, has developed a Masters course in the ‘Celtic Arc’ and continues to collaborate with Llan de Cubel in Asturias.

Simon’s composition draws upon the Celtic musical traditions of the different musical communities he has been associated with. On moving to the Hebrides his first project was to compile the tune book and establish the Simon Bradley Trio with the aim of complementing the published collection with a CD recording. The album Grogarry Lodge was mainly recorded live in 2012 in that shooting lodge in the South Uist Estate (Storas Uibhist) over a long weekend, with some tracks taken from a house concert held at the time. The trio comprises fiddle and viola from Anna-Wendy and Simon accompanied by guitarist Matheu Watson. Matheu was taught by Anna-Wendy on the music programmes in the Hebrides and is now serves there as a visiting lecturer. The trio have performed tours and festivals in the UK, Spain and Australia.

The recordings presented here were made in Edinburgh, where Anna-Wendy and Simon first met, amongst friends at a house concert in the home of rareTunes founder the late Derek Hoy, with whom Anna-Wendy had played for over a decade in the Bella McNabs Dance Band and, for a time in Jock Tamson’s Bairns.

All tracks recorded and edited by Stuart Eydmann, Edinburgh, 21 January 2015.