The Scottish Screen Archive has a film of Robeson leading a May Day parade in Glasgow, from George Square to Glasgow Green where the crowds listen to him making a speech:

There are photos of Robeson in Edinburgh and Glasgow in 1954 in the http://www.scran.ac.uk collection. Search on “Paul Robeson”

See notes on other film of Robeson in Scotland in the info for the track Joe Hill. For further information on Robeson and Scotland see Timothy Neat, Hamish Henderson: A Biography Volume 1 p.232.

Paul Robeson in long-distance conversation from New York with the miner’s of Wales at the Miners’ Eisteddfod, Porthcawl. Singing from Robeson and the Treochy Male Voice Choir. Released on record by the National Union of Mineworkers (South Wales Area) by Cwaliton Records (Wales) Ltd. MLP 3001.

Paul Robeson sings Did’n My Lord Deliver Daniel, All Through the Night, This Little Light of Mine, All Men are Brothers and Schubert’s Lullaby.

For more on Paul Robeson and the Welsh Miners see this article in the Guardian and this document Robeson-in-Wales from the Peoples Collection Wales.

Alan Booth, a pianist who accompanied the singer Paul Robeson in concerts and on recordings and who was one of the first black musicians to tour the United States as a member of integrated chamber ensembles and orchestras, died on June 4 at the Heathwood Nursing Home in Newton, Mass., where he lived. He was 71.

Mr. Booth graduated from the Oberlin Conservatory of Music in Ohio in 1946, and he began working with Robeson soon after. He accompanied Robeson until his farewell concert in 1958.

Mr. Booth also toured widely as a soloist. He was a founding member of the Symphony of the New World, an ensemble that was said to have been the first integrated orchestra in the United States. He performed as a soloist with the New York-based orchestra at Carnegie Hall and at what was then Philharmonic (now Avery Fisher) Hall in the 1960’s. 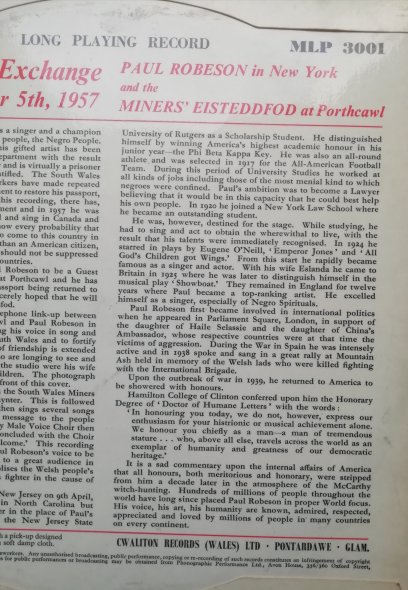 Hill was memorialized in a poem written about him c. 1930 by Alfred Hayes titled “I Dreamed I Saw Joe Hill Last Night”, sometimes referred to simply as “Joe Hill”. Hayes’s lyrics were turned into a song in 1936 by Earl Robinson:

Paul Robeson sang this song while in Edinburgh to perform a miners’ benefit concert in the Usher Hall for miners and their families sponsored by the Scottish National Union of Mineworkers as featured in the documentary film A Star Drops In (1949):

“Robeson had long been something of a hero to the British mining community, ever since he starred in the film Proud Valley (d. Pen Tennyson, 1940) as an American sailor stranded in Cardiff who finds work in a Welsh colliery (the newsreel opens with a short clip from the film).

Robeson then visits an Edinburgh colliery and sings ‘I Dreamed I Saw Joe Hill Last Night’ in its canteen. Joe Hill was a poet and union organiser for the Industrial Workers of the World (IWW), executed on a trumped-up murder charge in 1915 and subsequently immortalised as a workers’ hero of similar stature to Robeson himself.”