I suppose we should have taken it more seriously, July’s Newcastleton Traditional Music Festival. The fact that we did not, missing all the competitions and instead hanging delightedly about the ‘fringe’ of impromptu sessions in hotel, square and courtyard, yet still came away feeling heady with ballad and reel, and genuinely enriched by the wealth of good music and good nature, is comment itself on this splendid event.

We were not there on the Friday, the first night, when Scottish and Northumbrian pipers, traditional singers, fiddlers, accordionists, dancers and a genial army of folk enthusiasts – some 700 outsiders in all – descended on the Border village from both sides of the Cheviots. It was the sort of gathering which some 600 years ago would certainly have meant an enthusiastic sacking and a ballad to rank with ‘Otterburn’.

As it was, much of the horde was accommodated in a sorely-packed camping site and in bed ‘n’ breakfasts throughout the village. Breakfasts were served in the village hall by the Women’s Rural Institute, and the only bloodied nose we saw was caused by an inebriated tumble from a seat.

Four of us drove down from Edinburgh early on Saturday afternoon. At Newcastleton, a neat little village established in 1793 by Henry, Third Duke of Buccleuch, the sun-baked square gave plentiful evidence of the festival. Preoccupied contestants, clutching pipes and fiddle cases, and a crocodile of recorder-brandishing Brownies bustled between sprawling sunbathers, semi-clad in a fair footage of denim.

As yet we had not heard any music, apart from odd strands of tune drifting from the Unionists’ club and various halls where the competitions were in progress, but a happy tumult from the direction of the river drew us to where the unofficial festival was wildly cooling off.

In the slow-flowing Liddel Water the visitors cavorted, some apparently guddling cans of beer from river bottom caches, in what resembled a joyful parody of a Busby Berkely water spectacular. Hoots of wet laughter mingled with the sigh and peep of concertina and tin whistle on the riverbank, while the whole was presided over by a guitarist and a washboard player, perched on a rock cairn in the middle of the pool, belting out ubiquitous Beatles’ songs.

It may not have been quite as uninhibited as Woodstock – nobody seemed to be totally naked although there were a few near moments, – but the scenes immediately brought to mind the now-definitive American rock festival. The same performance was repeated on the Sunday afternoon, the revelers joined by ourselves and two pop-eyed local collies who coursed up and down the water’s edge yapping frantically like distressed baths attendants. 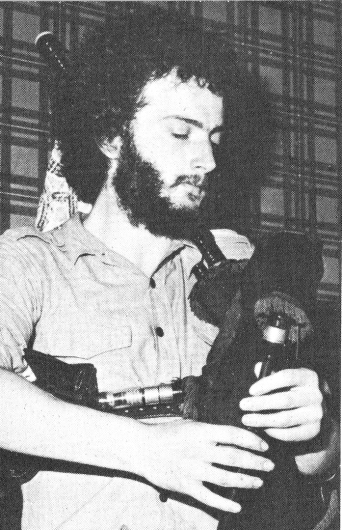 Traditional music, however, was what we had come to hear and traditional music we found a-plenty, the highlights of the Saturday evening and Sunday afternoon merging in retrospect into one glorious rant. Out in the bright and dusty hotel yard spry old men bearing drams, pints and instrument cases mingled with the younger minstrels or formed small groups of their own, heads inclined to fiddles, serious faces puckered to whistles, as if calling up their past youth with the tunes.

Elsewhere in that vibrant yard, in which the various musics infringed on each other like widening ripples on a pond, border ballads and other songs of worthy lineage were spontaneously sung unaccompanied, recited as they have been for the past few hundred years. On record these songs never generate the same presence … but to be on the spot when a ballad such as ‘The Flower of Northumberland’ is sung-told is to be aware that one is literally hearing the voice of the past. 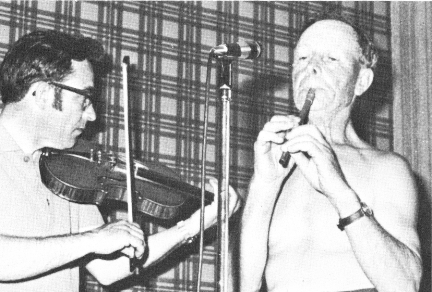 This was the festival, one of the organizing committee members later told me, at which no one is booked; the talent just keeps on turning up. To walk into a small crowded hotel room that weekend was to discover bellows-blown Scottish small pipes and silver concert flute in full flight. I wondered, as I have done for years, how such a stridently nimble tune as ‘Drowsy Maggie’ was ever landed with such a misnomer.
As Saturday evening wore on a courtyard resounded to the clamour of pipes, fiddles and bodhran, the shadowy players bending to their task while the encouraging yells of the spectators mingled with shrieks of swifts tumbling in the hot sky. 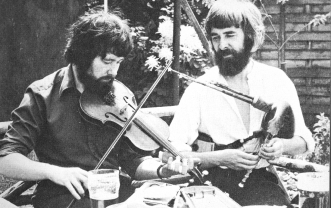 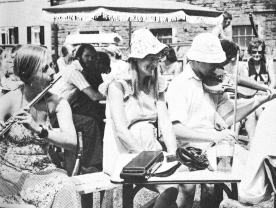 A bonnie sound indeed. I wonder what John Armstrong M.D., eighteenth-century physician, poet and essayist, would have made of it all.

He is buried a few miles upriver in the old Castleton parish kirkyard. He was best known for his four-volume didactic poem ‘The Art of Preserving Health’ published in 1744. He died thirty-five years later, aged 70, after falling while getting into his carriage.