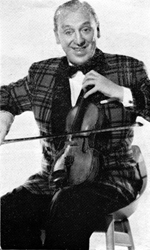 Born in Kenmay, Aberdeenshire, his father was a noted strathspey and reel player. He began learning violin aged five . He became interested in singing in his teens and, during army service in the South of England, he served as a musician. He played in several London orchestras before becoming a soloist and, during the 1960s and 70s, he worked on the White Heather Club tours and with Jim Johnstone and his Band.

Many thanks to Robert Wright who has supplied information on other Morgan releases, including sides for Beltona.