So we wrote to Mrs Kennedy-Fraser, the famous collector of Hebridean and Scottish songs, and asked her to recommend some one who could sing her “Songs of the Hebrides”, and she put us in touch with Hugh Mackay, who arrived from the Far North when we were in the throes of our last week of rehearsals, in April, 1921.  He had only once been in London before …

Some of us were already familiar with the songs, but we were none of us prepared for the sweetness of voice and tenderness of expression with which he sang to us; we were transported far from London into some remote place of hills and seas, for he sang naturally and without effort the Gaelic songs as only one born to the language can sing them.  There was then no doubt in our minds that the League had made a discovery.

To-night we actually dined, and afterwards Winnie, Totie, Muriel, and their hostess came in.  She played Sinding and Schumann, Hebs [Hugh Mackay] sang some Gaelic songs, and I read aloud a moving poem by Felicia Hemans called A Father Reading the Bible.

And he [John Nevill – actor and novelist] mentions [in his diary] a day with no show, spent in Edinburgh, on our way to Hawick, where we had tea with Mrs. Margery Kennedy-Fraser.

She was charming; so like Ellen Terry, in voice, manner, and appearance.  She sang several Hebridean songs for us, including “A Crone’s Lilt”, which she did extraordinarily well.

In the summer of 1923 Hugh Mackay, Judith [Wogan], and myself were on holiday in the island of Barra.  During our visit it was arranged by some of Hugh’s friends there to give a “Waulking” in our honour.  “Waulking” is the manual method employed by the island women in shrinking their homespun tweed.  It is made an occasion for song and dance… Column met us at the door with a Gaelic greeting as we entered a fair-sized room with a newly sanded floor which had been cleared for dancing… At one end of the table a blanket was lying folded lengthwise, and round it the women who were going to shrink it were sitting.  When they began it was clear that it was the older amongst them that were the experts at the work and at the songs that accompanied it.  They were full of vitality, and the rhythm of their songs was grand… The team work was excellent, the leader, a little old woman with a reedy voice, sang a line of the song, and the others, seizing a piece of the material before them, began a rhythmic beating and rubbing of it on the table as they took up the chorus, passing the blanket on from time to time, so that it travelled round the table until every part of it was treated in the same manner…

As the work went on, the songs changed from a slow to an ever-increasingly quick tempo, until at the end of the process there was a shout which left them breathless and laughing, although this was only the prelude to other songs that followed.  The whole evening was a triumph for age; the only signs of self-consciousness came from the group of young people who stood round the doorway and looked on.

Finally, at a late hour, the dancing began in which our three old ladies took part.  Hugh, with Morag our hostess as partner, challenged one of them to a duel as to who could keep going the longer. They with a reel or she with her song, for mouth music is what they dance to.  She vowed that she would “put him off the floor”, but in the end lack of breath and laughter defeated dancers and singer alike, and they finished amid the applause of the assembled company.

The Song and Story of the Gael by The Rev. KENNETH MACLEOD , of Gigha, with musical illustrations by HUGH MACKAY (tenor)
Dr. Kenneth Macleod is the minister of Gigha. He will be remembered for his famous collaboration with the late Mrs. Kennedy-Fraser in collecting and publishing the ‘ Songs of the Hebrides ‘. He is a Gaelic enthusiast with a modest disposition, who gets little recognition for all the work he has done to preserve the vanishing music of the Western Isles. He was last heard in the Scottish programme in January, 1934. Hugh Mackay has been associated with Dr. Macleod for a long time in popularising Hebridean songs. He is popular throughout the country for his work with the Arts League of Service. 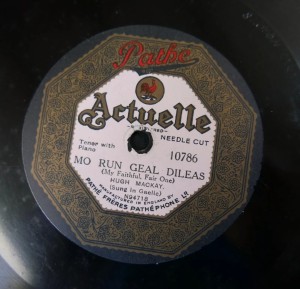