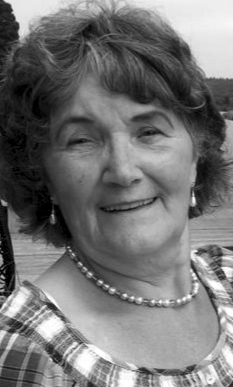 Dena Graham is from Borgh on the Isle of Lewis. She moved to Inverness in 1960 and began singing publicly in the 1970s at popular ceilidh places such as the town’s Carlton and Cummings Hotels and playing a part in the Inverness Folk Club. She performed in many private and organised events and festivals across Scotland, sang at Gaelic Mod opening concerts, at the Eden Court, on Radio nan Gaidheal and at a BBC television recording in London. Over many years, Dena did much to organise and perform at Charity Concerts in support of the Highland Hospice and the Royal Northern Infirmary where she worked until its closure in 1999. Dena’s singing continues to be appreciated to the present day through regular features on Radio nan Gaidheal.

The following twelve tracks are from the 1986 album Orain Dhena a Borgh released on cassette by Taigh na Teud. Produced by Hettie Innes. Recorded at the Proles Pleasure Studios, Tain, by Terry B. Small.

All titles and notes are reproduced precisely as on the original release. With thanks to Dena, Marianne Kenley and Christine Martin for their invaluable assistance in sharing these and the other tracks featured.

Written in the 19th century in Lewis by Kenny Smith of Lochs.

Written by Norman MacLeod of Scalpay.

One of the finest songs of the last war, this was composed by a [Malcolm] MacLean of Ness.

Written in the year 1808 by a MacLeod of Bru, a village on the west side of Lewis.

[Note also the 1989 version at Tobar and Dualchais: Òran Ghabhsuinn Track ID: 93197 A homeland song in which the composer asks his sweetheart to accompany him to Galson. He describes the beautiful surroundings. She will have sheep and cattle, and will never be cold there.]

All titles and notes are reproduced precisely as on the original release.

Written by Alasdair Nicholson of Ness. It’s a song of the homeland, the beauties of Lionel, to where the bard belonged, and of Ness itself. There may not have been much around in the traditional Highlands – was there anywhere but all the songs are agreed on the great sense of belonging and personal and family contentment.

This is a sweet, romantic ditty but Highland realism comes into it too. Our bard may admire the young lady and her beauty but she needs to be good at milking cows and brushing the beau’s shoes.

Murdo Ferguson is the bard of this song. It is a homeland song again which speaks about the joy of being a youngster in Lewis and playing on the shore. The poetry many not be the greatest but there is nevertheless a well of genuine sentiment which makes the song attractive.

This song was written by a St. Kildan woman who fell for Iain Og Ile, the great tradition collector from Islay, when he visited the island. It is one of the gems of Gaelic poetry. We do know from the words that our poetess is pregnant, but to whom? As far as she is concerned, Iain Og is beyond reproach and as for the gossips – chan e ‘n fhirinnthug iad oirrn – they didn’t speak the truth about our affair. Perhaps, unhappily, our young St. Kildan woman has tried to fulfil unrequited desire elsewhere. Dena shows full versatility here and the true traditional capacity for ‘getting inside’ a song and belonging for those few minutes to the poetess and the music only.

It is said that this song was written by a young blade from Harris who fell madly in love aboard the steamer from Oban. Alas, he’d also been in the bar and so our Barra damsel was far from bowled over. But our lasses are diplomatic and she told the bard she belonged to Lochmaddy, clearing off home of course, when the boat comes in to Castlebay.

[Note also the 1989 version at Tobar and Dualchais: Òigh Loch nam Madadh Track ID: 93223 In this love song the composer tells how he met a girl from Lochmaddy on the boat and fell in love with her. He cannot sleep as he is thinking of her.]

This was composed by Mary Ross of Sleat. She was a servant lass in the household of some tacksman there who appears to have taken advantage of her. Fine for him, but it was a hard life for such a woman in those days for
whom, if she couldn’t rise above it, there was no compassion.

I’ hillin’s na hillin i

This song goes back to the time when many Highland men were sailors. Sometimes they passed the time away by composing songs and since the demise of the merchant navy it’s a font of song sadly missed. However, our song here is by the lady landlubber who can’t wait for her boyfriend to come back home to her.

This is a song in praise of Harris, and like the one above, would appear to have been written by a sailor. Dena is exceptionally fond of this song and it shows fully her command of songs in traditional mode from all parts of
the Highlands.

A song whose tradition we can follow, although we don’t know who composed it and our first point of contact is an Isabel Smith of Keose in Lewis.

This is a little love ditty written by Malcolm MacLean of Halbost in Ness. His most well known song is Deireadh Forladh 1940 which is one of the most beautiful, understanding and humane of any era songs about war in Gaelic. [See above] Our song here shows how a bard who can turn the art into an expression of all human emotion. For the Gael, poetry has long been our private and public expression.

This is a real ceilidh belter. Everybody knows it and everybody sings it.