This is a research project by fiddler/historians Dr Stuart Eydmann (Edinburgh) and Tim Macdonald (Chicago) with the long-term, ambitious ambition of identifying and discussing every known representation of the fiddle in Scottish art. The ultimate aim is a learned publication and audio/visual output on the subject.

This short video was produced to introduce the project at the North Atlantic Fiddle Convention at Aberdeen.

From a painting of Trongate, Glasgow included in a display at People’s Palace, Glasgow. A woman ballad singer standing with the fiddler is not shown.

The musician is clearly blind. Note the playing position of the fiddle and his bow-hand grip. 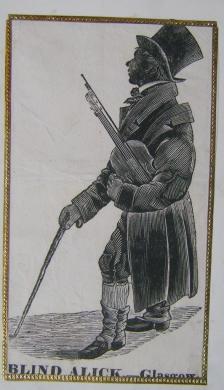 From  “Nature’s revelations of character; or, physiognomy illustrated. A description of the mental, moral and volitive dispositions of mankind, as manifested in the human form and countenance” (New York, 1879). p. 403.

William Gemmell made this statue said to be of Blind Alick. It has been suggested that the work draws upon Geikie’s depiction. The statue was exhibited on Glasgow Green in July 1849 during the Glasgow Fair. Gemmell’s display was said to be ‘well attended’* Glasgow Herald, 13 July 1849.

The statue is now on permanent display in the Carswell Centre, Eaglesham, East Renfrewshire. 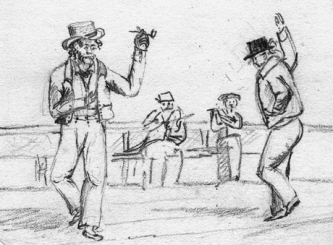